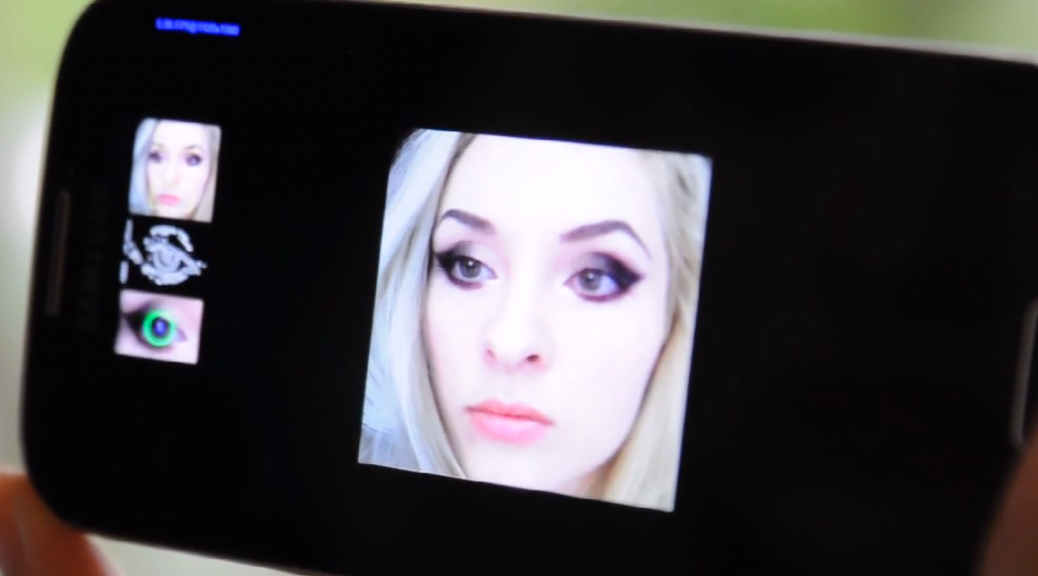 There are several ways of detecting iris, all of them requiring good illumination and an image resolution higher as possible, for achieving best results. My first approach of detecting iris was to use image processing to acquire a binary(black and white) frame, highlighting the edges in the image, from which the shape of iris is detected. In the videos I’ve made, you can see in on the left side the detected iris in a green circle.

Recently, I had the chance to make some research work on gesture detection software, it was not my personal project, but for another company so I’ll not be able to post details. Mainly it uses optical flow to detect different kind of gestures like: eyebrow raising, smiling and blinking. Optical flow compared to matchers for gesture detection has its good and bad parts. Good part: it doesn’t need training! Bad part: It’s not a “continuous” gesture detection, but more of a initiation of it, but for the purpose of my work, it was a good choice. I’ve made a video a month ago, which does not include the blinking and several other improvements, but I’m going to share it with you until I’ll make a new one with all the gestures:

Hope you liked my first post and my research result. Research requires many hours of hard work so results don’t come up from one day to another, besides I have several other projects I currently work on so my posts will definitely not be something to daily basis, but surely I’ll make my best to have something inspiring and good to show, so stay tuned!

Hi everyone and welcome to my artificial vision blog! Since this is my first post I’d like to share just a little background on this project. My interest for computer vision started back in my college years: pattern, object and facial recognition, software image processing, OCR were some of my favourite technologies studied back then, so it was obvious my Master Thesis should be based on one, or all these, combined. Believe it or not, back then, I was not even interested to hear about other free solutions that could contribute to my final results, this is a half good and half bad decision at the same time. Reinventing the wheel is sometimes redundant and you might be dissapointed when finishing your hard, long-lasting work to notice that the free solutions available were ready to use and better, in terms of performance, compared to yours. I know that, I’ve been there. I was a little stubburn and I also felt that using OpenCV for face/pattern recognition for my Master Thesis, would not have a valuable contribution from my side, that is why I’ve decided to make one from scratch. I’m not going to go now through all the research work, maybe some other time, but I can say that given the little time I’ve assigned to the final thesis work – I’m sure you know what I’m talking about :), my final: pattern recognition software, even though not really improved in terms of speed performance, had fairly good results and I was quite proud of it. Research on patter recognition during that period of time, made me see things from a different perspective and understand how this technology works. So my final conclusion and my advice to you is, that whenever you have the chance to use a free library, don’t hesitate to use it or at least try it, to see it’s potential but also don’t be “afraid” to understand and go deeper, after all, the available libraries are also made by humans(not aliens) and can definitely be improved.

During these years, I’ve started several projects that were based on these technologies but I didn’t have the chance to finalise them for different reasons. Let me mention some of them:

HeadMouse(moving a cursor on the screen with the pupils, which in the end it turned out to be a software that would move the cursor with the head, this is where its name comes from) – besides being a useful tool it is also quite weird when showing it to others and I had lots of funny reactions haha. If I remember correctly it was my sister I’ve tested my software with. So I pretend that I can control my laptop using my thoughts. I ran the software in the background, and without touching my laptop or my mouse, I started moving the cursor around, and my sister was like: “OMG how do you do it?!!” And I was like: “Please! Let me concentrate!” I always love making tests on her, as she is so nice to always try, even my most retarded softwares and pretend they are so cool, not even my husband is ready to do that for me.

Speaking of which, since I had some serious problems with my sleep during my life, I’ve searched everywhere for a software to keep track of my sleeping hours, because I was aware how important it is to my immune system and overall health. I failed to find anything, so I’ve made the “stupid software” – this is how my husband likes to call it. “The stupid software” pops up once a day, first thing in the morning and is asking you: How many hours did you sleep this night? You enter the number, and it shows you the all time average of the number of hours you’ve slept. This way you have an idea if you are reaching the average of 6-8 hours/night. I know it’s so stupid, but I’m also sure there are PEOPLE OUT THERE, that have sleeping issues and would die to have this software!! haha. I was really aware of this fact so I’ve planed to convince my husband to let me share it somewhere in the benefit of all insomniacs, but he wouldn’t let me, he was so ashamed of the “stupid software” that he wouldn’t let me have it posted ANYWHERE. So if you’re one of those people, just drop me an email, I’ll manage somehow to send you the installer when he’s sleeping and my insomnia strikes again :). As I’ve told you, my sister thought it was pretty cool 😀 and she used it for a while, my husband is still making fun of me, after all these years, but just the other days I thought how useful it would be to have it back installed, though I’ve changed the OS, it won’t work, hmm..I should be thinking of an upgrade!

Back to something more serious now.. I’ve told you about my HeadMouse software, this is one of the projects I’ve made, using computer vision, but it never made it to the light for 2 reasons: 1.I found a freeware that was working flawlessly, but for desktop 2.Even if, mine was supposed to be a mobile version, back then, there were no front cameras to the phones and the resolution they had was not good enough for an accurate cursor movement using the pupils so I’ve replaced it with a head movement, this is how it turned out to be HeadMouse. I was stuck on the idea with the pupils control of cursor and it never made it to the light.

Another software that I’ve started working recently, was a sort of combination between photoshop and instagram for mobiles. This is an ongoing project of mine, but like many others I’m not sure if I’ll ever finish it, mainly for the reason that it’s hard and mostly very much work(that takes a lot of time) to be able to even reach what the competition offers. Even if I have the knowledge and I have so many new fresh ideas to come up with, compared to what is on the market, I think it’s the kind of software that would require a team, it’s too complex for a single developer. I haven’t given up on it, I still have days when I work on it and I might put some updates with the progress.

silicon vision for a new era